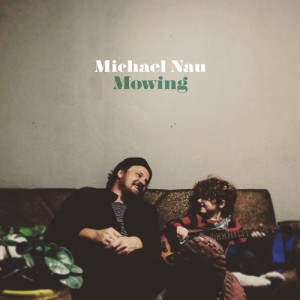 Michael Nau is from the softly-softly school, allowing life to unfold at its own pace: if the UK and mainland Europe didn’t know who he was, they’d come around it to eventually. Now that Full Time Hobby have decided his exquisite solo record Mowing deserves to be his first official release over here, that time has arrived.

Nigel Adams, the co-founder of Full Time Hobby said: “I heard Michael’s album earlier this year and instantly fell in love with it, memories of some of my favourite artists came pouring out the speakers; Lee Hazelwood, Tim Buckley, Tim Hardin to name a few but with a very definite sound and voice of his own. I got hooked, listening it to it every day, many times a day. I just had to release this record. With that great shot of Michael and his son on the cover... it’s a classic in waiting”.

The album’s 12 spare, tender, wistful songs – its mood perfectly mirrored by Nau’s voice - draw on folk, soul, country and aspects of bossa nova and reggae. In other words, not your usual brand of Americana emanating from the Appalachian Mountains where Nau lives, in the town of Cumberland in the state of Maryland.

Besides its ember-glowing warmth, Mowing has signature motifs:  female backing vocals, like a miniature gospel or soul choir (Nau particular loves Curtis Mayfield, and also hears similar vocal troupes in reggae), and percussive-style embellishments. Nau has often used a xylophone before, and on ‘Love Survive’, marimba takes a lead role. ‘Your Jewel’ sounds like a steel band was on board, while a mellotron drifts through ‘So Long’, adding another layer of drowsy, hypnotic charm. ‘The Glass’ is a little more uptempo, but retains a blurry, groovy ambience. ‘In There’ is an engaging finale, beginning with strings and bird noises, before a sampled voice cuts in and then Nau’s gorgeously beatific song kicks in.

Growing up in Cumberland, Nau was a late-comer to folk and rock, given his parents’ love of spiritual music. But his father did also own a couple of Kinks albums, and then on his own, Nau discovered the rich singer-songwriter seams of Harry Nilsson, Damian Jurado and Pedro The Lion - all of which informs his own music. After fronting cult indie-folk favourites Page France and Cotton Jones, Mowing represents a new phrase in Nau’s life, with a sparser, more soulful and tender groove. It’s not only down to Nau’s love of soul music, but also his method of songwriting. Having previously worked alone, writing and recording instrumental pieces before vocal parts and overdubs turned them into songs, he decided to write finished songs first, and then recorded them in a series of sessions at friends’ spaces in Vermont and Connecticut while his wife (and long-time singing partner) Whitney McGraw was first pregnant, and after the baby was born.

Several tracks were even recorded live, like ‘Good Moon’ (which floats a little like Tim Buckley, with a little touch of Nilsson too) and ‘Love Survive’, the latter a very limited 7” single (on the subscription-only Singles Club label) that preceded Mowing’s US release, and has been added to the UK edition.

“No matter how much I enjoy putting things together on my own, nothing’s as rewarding as playing with people, and working out songs that way,’ Nau feels. “It made the music feel more real and true. It’s the same vibe as a live show, when I’m least in control and I don’t spend nearly as much time thinking about stuff or how to fix it.”

Written between 2011 and 2014, the songs arrived in Cumberland, or while touring, on a back porch in Nashville and in Vermont and Connecticut. They were not intended to be an album until Nau realised he had the makings of one, and cherry-picked the songs that felt like a cohesive statement.  The title comes from the album’s sole instrumental “Mow”, and shortest song, all smoky and woozy colours, that opens side two of the vinyl version. “I wanted a one-word title, with no grand meaning,” Nau explains. “I can’t remember why I named the track ‘Mow’ to begin with!”

Lyrically, Nau keeps it descriptive, but loose, oblique and yet emotionally involved. “I’d rather not explain them,” he sighs. “Just to say, sometimes I plan something that makes sense, and not uses metaphors, but it doesn’t always work out that way.”

So those references to nature in ‘While You Stand’ and ‘Winter Beat’, or those lines in ‘The Glass’ - ‘Be gentle on the glass, beauty in those cracks/ smack-dab at the heart of it similar to the opposite of emptiness and blue’ - are open to interpretation. But Nau will concede that ‘In There’ – ‘spending the day in a submarine listening / watching the waters go passing by me’ – refers to his former solitude in his home studio garage, and ‘Smooth Aisles’ concerns his inner demons: yes, even an easy-going individual like Nau questions his motives. “Am I making music because I love it, or is there some grander thing going on?” he ponders, “I don’t even know where the idea of ‘smooth aisles’ comes from either…The words just come out, and they sorta work or they don’t, and sometimes I can’t find a replacement and, in the end, I’m glad I can’t!”

“I try to be honest about what I’m doing, to be myself while making music,” Nau concludes. ‘But I don’t think anything would get done if I tried to figure out what it all was, or means to me. I just love doing it, going on with nothing and coming out with something, over and over.”